The weekend of June 13th, my great-niece married the love of her life, and the kids and I attended the lovely ceremony. It was held on a beautiful summer’s day in a quaint, pre-1900, Catholic church in a tiny town in Northeast Nebraska.

It was supposed to be a quiet trip, but it wasn’t. Murphy’s Law – or Nincompoopery – ensued shortly after trip planning began. This trip played out in a perfect elemental plot fashion.

In April, my great-niece, Ali, had asked me and one of my sisters to attend the cake table at her wedding. Although I didn’t like the idea of being old enough to be considered the aunt that cuts the cake, I was excited to have family and friends all in the same building, so I could get to visit with everyone at least for a few minutes.

Although I had said yes, I waited until 5 days before the wedding to book the room. This is northeast Nebraska I was travelling to, not Omaha or Lincoln. County fairs are the only major happenings in that part of the state. Those do not begin until late July and are finished by the end of August, so I thought I was pretty safe waiting until a week before the wedding. I wasn’t safe. The Lodge (and all area hotels) was booked solid by the time I tried to make reservations.  The Christian Cross Festival has grown to a two-day, free event that apparently attracts people from afar who inevitably need lodging. Even with ample free tent camping at the lake, every available room was booked. Luckily, I have family in the area that still like me. My kids and I were to bunk at my sisters.

I had downloaded some new books onto my Audible app, and the kids loaded their Kindles with movies, music, and shows. The plan was to leave no later than 10 a.m. Thursday morning. We were an hour and a half late leaving our house in Tennessee, putting our arrival time to my sister’s house at a little past midnight.

Even with the late departure, the trip was going so smoothly: the kids were watching movies on their Kindles, and I was listening to either the radio or to Kingsolver’s Animal, Vegetable, Miracle on my Audible app. We were each in our own little worlds and traveling a route we knew like the back of our hands.  It was quite a peaceful seven-hour journey across Missouri.

We were in Omaha by 11 p.m, and once Effy and Z spotted the big train engines at Kenefick Park that welcomes visitors crossing the bridge from Council Bluffs, IA. the kids fell asleep by the time we reach Boys Town.

I had driven another peaceful hour when my travels were rudely interrupted by a deer the size of a horse trying to play chicken with me in the middle of the dark highway. Nebraska deer are so rude! and huge!

In an instant, Monstro-deer (or rhino-deer or Jurassic-deer as my friends have now taken to calling it) was challenging me to a 70 mph, head-on collision: I was going 70 mph; he was standing still, shocked, as if I had been the one to appear out of nowhere.  I slammed on my breaks and yelled, “NO!” hoping that he’d regain his wits and, with a harrowing leap, jump to safety. It wasn’t to be. Instantly after yelling, I felt the deep thud of impact, and my car stopped dead in it’s tracks.

I don’t remember closing my eyes, but I must have because I remember opening them only to see the entire front end of my car smashed in to windshield. 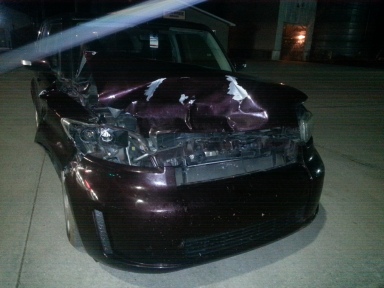 Z woke screaming “What did we hit? What did we hit?” which woke Effy, who wondered what we were doing stopped in the middle of the road. She had slept right through the whole thing. Bluntly, I said, “We hit a deer,” and then began to audibly walk myself through the next steps:

“Are there any cars around? Check my mirrors. Look over my shoulder. Nope, no cars.”

Pulled car to the shoulder of the road.

The car is silent for 15 seconds.

While I waited for the deputy sheriff to find me in the dark at a not-so-certain point on Hwy 275, I got out of the car to inspect the damages. It was bad. And the deer ran off.

I then called Roadside Assistance. The young man on the other end of the line tried to be helpful, but stranded out in the middle of nowhere, the closest tow truck was 45 minutes away, and then I wasn’t guaranteed a place to stay or a replacement car to be able to continue on to my sisters that night. My husband was 10 hours away and asleep in Tennessee, and I couldn’t think of anyone near my wreckage that would be able to tow a car.

While I was talking to Roadside Assistance, the county deputy sheriff arrived. He looked over the car, noted that the deer had run, or limped, off, and that the car was not to be driven. He could have called the tow truck but confirmed that it would take 45 minutes for them to arrive. He did say that he was able to stay with me until someone came to help or until he had another pressing matter.

I decided to call my brother-in-law, who was sound asleep, warm and cozy in his bed an hour away from me. Within the time a tow truck could arrive, so could my brother-in-law with the added bonus of delivering me to my destination. So I called him, and like the good guy he is, he came to our rescue.

The deputy, Ed, and I decided I would hobble my car 8 miles to the gas station in next town. Ed would pick us up there.

Nebraska in June is not the same as Tennessee in June. It is cold and windy in Nebraska. The kids and I were dressed for Tennessee’s hot and muggy. When Ed arrived, I stood out in the cold wind shivering like I hadn’t spent the first 40 years of my life there, trying to assist him with tethering my Scion to the car trailer.

We drove the hour back to his house, unloaded my crumpled car, drug our suitcases into the house, and went to bed.

It all seems so easy, except it wouldn’t be a good story if things went easily.

What are your thoughts? Cancel reply