As we prepared this weekend for an ice storm, my kids wanted to make sure that I had enough hot chocolate in the pantry to get us through the predicted two-day event. (The fact that an ice storm can bring the Mid-south to a stand still is the topic of an upcoming post.)

If it wasn’t for my children, hot chocolate would not be a winter-time staple in my house. I prefer a hot chocolate-less winter. 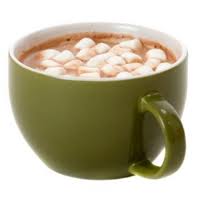 I don’t like hot chocolate.  I did, but I don’t now.  The journey from there to here is an interesting story that all started with a bad decision.

Growing up in a the Midwest where the winters were (and still are) relatively frigid, warm liquids were (and still are) a must.   My mother made hot chocolate mix from scratch and kept it in an ice cream bucket on the kitchen counter for easy access.  My brother, #9, and I could make a piping hot cup at any time of the day without requiring assistance from our mother.  This could be a good thing or a bad thing, depending upon the one’s individual decision-making skills.

On a particularly cold afternoon after playing outside, my brother and I came in to warm ourselves with some hot chocolate.  We put the pan of water on the stove, brought it to a rolling boil, and then poured it into the cups that had a measured amount of chocolate mix in them.  There was a slight ting in our icy fingers as we wrapped them around the hot cups of chocolate.  As our hands began to thaw, we placed our faces over the cup allowing the steam to warm our faces and to breathe in the silky promise of warm chocolate.  #9 stuffed his cup with a mountain of marshmallows, and I aligned a simple layer to cover the top. While I sipped my cup of hot chocolate, my brother drank his quickly and made another. By the time I had finished my one cup, he easily had drunk two cups of hot chocolate and had eaten two mountains of marshmallows.

Later that evening after supper, we were in the living room watching television with my parents when my brother asked Mom to please make him a cup of hot chocolate.  He could have easily made it himself, but everyone knows that a cup of hot chocolate made by your mother is much more satisfying.  It is always just the right temperature and is made with just the right ratio of milk and mix, and mothers always know the perfect amount of marshmallows to grace the top.  When Mom returned with his requested cup of hot chocolate, #9 drank it quickly and asked for another one.  She made it for him, again with the perfect combination of ingredients and love.  He again drank it quickly.

He asked for another cup.  And she made it for him.  And he slurped it down.  And she warned him again.  He told her he was fine, and he went and made himself another cup.

After watching Archie Bunker, Hawkeye, and Carol Burnette, we were

sent to bed.  At that time, my brother and I shared a room and we slept in bunk beds.  I slept in the top bunk because the bottom bunk was too enclosed, and I would have nightmares.  Although #9 was the oldest and would have preferred the top, he resigned himself to the bottom bunk, claiming it was too far to crawl to the top anyway.  But that night, #9 decided that he was going to sleep in the top bunk and that I had to take the bottom.  I vehemently opposed the idea based on the certainty of having a wild nightmare that would end in me crying out for my mother.  #9 would not concede.  He resolutely climbed to the top bunk and buried himself under my blankets.  I then had to crawl into his bunk.

Lying in the bottom bunk looking up at the metal springs that kept the upper bunk and my brother from falling, crushing the air out of me and immobilizing me to the point I would slowly suffocate to death, I began to panic.  Foreboding thoughts of dying in the middle of the night without any way of screaming out for help, only to be found the next morning by mother who would be grief stricken for the rest of her life, started swirling in my head.  Becoming claustrophobic from panic and needing air, I moved my pillow to the outside of the bed, so I could sleep with my head hanging half way off of the bed.  In that position I fell asleep.

In that position I was abruptly awakened by a sudden onslaught of regurgitated now not-hot hot chocolate. In the middle of the night, my brother’s stomach decided that 6+ cups of hot chocolate, although delicious, was too much to digest and needed a little relief. Now wide awake but not knowing what hit me (literally), #9 unloaded on my head again. I jumped out of bed to see him hanging over the upper bunk, slimy liquid dripping from his lips. “Mom!” I yelled, ran out of the room, down the hall and stopped at my parents door.  We were not allowed to just barge in, so I stood outside their door waiting for one of my parents to come out. I waited for a few seconds, but neither one of them appeared in the door to help me.  So I decided to try again.

I drew in a deep breath and screamed at the top of my lungs, “Moooooooooooom! #9 is puking up his guts!”  It took about 0.00001 of a second for my mother to appear in the doorway, barely look at me, and run down the hall to assist my brother.  Mom grabbed #9 out of bed and flung him into the bathroom that was across the hall all in one quick motion.  With my brother’s stomach content dripping from my hair and face, I stood in the doorway waiting my turn to be cleaned up.  When she came out of the bath room, she looked at me in surprise and asked, “What happened to you?”  I was dumbfounded. I wanted to say, in the words of the mid-1970s, “Duh,” but my mother would have slapped me for being smart.  I chose to answer her honestly. “He puked on me.”

The rest of the night was pretty typical; mom got us both cleaned off and the bedroom cleaned up.  She put on fresh sheets, gave #9 a puke bucket, and made him lie down in the bottom bunk where I would be safe if he missed the bucket.

Dad slept through the entire ordeal.

Once you have had hot chocolate spewed on you by a sibling, you no longer crave hot chocolate as you did before.  In fact, it quite possibly could make you never want to see, smell or, God forbid, drink the wintery beverage ever again. 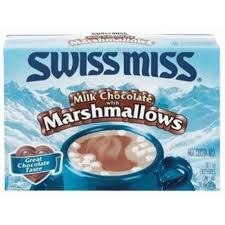 We try to do things, or overcome things, for those that we love, so I bought the 45 cup container of Swiss Miss and two half gallons of Vanilla Almond Milk.

They only get two cups a day.

4 thoughts on “A Hot Chocolate-less Winter”

What are your thoughts? Cancel reply